An investigation into the sources and pathways of the metals As, Cd, Cr, Cu, Hg, Ni, Pb, Se, V and Zn in ceiling dusts from 38 houses in the city of Sydney, Australia was conducted. These metals were investigated because of health concerns associated with heavy metals (As, Cd, Hg and Pb) and are considered good indicators of environmental urban pollution. Ceiling dust poses a health threat if the dust is disturbed and allowed to plume within the living areas of a dwelling and expose the occupants, especially children, to elevated levels of metals and fine particulates. In this paper, we report on the potential environmental problem of ceiling dust in the context of metals analysed, particle size distribution and exposure pathways of particles below 250mm.

Knowledge of ceiling dust exposure as well as house dust pathways is an important component of the dust cycle in the urban environment. Not only do they concentrate and contain dust particles emitted from local sources, ceiling dusts in particular show a historical record of particulate species that have been deposited over time in a well preserved sheltered environment. In our investigations, ceiling dust is identified as consisting of natural and anthropogenic particle species which can be sourced from emission types including those derived from: botanical, biological, industrial, smelter and mining, combustion, automotive exhaust, paints, building and construction materials, crustal soil and rock, bushfire debris and ocean spray.

In Sydney, roof coverings constructed from terracotta or cement tiles are the most common  material with a design that allows for air to flow through the roof cavities (cooling mechanism) and deposit dust particles on the ceiling below. The deposition of dust accumulates over many years since construction of the dwelling and can occur up to depths of over 100mm (Gulson et al. 1994) and weigh in excess of over 800kg (Bawden-Smith, personal communication, 1999). Accumulation rates of dust in roof types with sarking (covering under tiles), asbestos, corrugated iron and slate, tend to have lesser volumes of accumulated dusts because these roofs are better sealed.

Studies of ceiling dust in Australia are limited with some of the earliest being carried out at the Broken Hill Pb-Zn mining community in the late 1980’s (van Alphen, personal communication, 1991). Our early studies were focussed on lead near heavy industry and in particular from houses adjacent to a lead smelter and mining operations (Body 1986, Gulson et al. 1994) as a means of understanding children’s blood lead levels and local environmental contamination levels (Fett et al. 1992). Whicker et al. (1997) analysed ceiling dust for Cu, Pb and Zn within the south-western areas of Sydney and Chiaradia et al (1997) used lead isotopic signatures to assign anthropogenic and natural sources to particles in roof dusts surrounding a copper smelter. In this study we report on the metal concentration and particle size distribution and identify pathways of dust exposure from the ceiling into the living areas of houses, in Sydney.

Ceiling dusts were sampled from 38 residential urban houses located within industrial and non-industrial areas from the city of Sydney (Figure 1). Sampling was performed by carefully brushing a measured area of dust (1000cm2) into clean polyethylene containers or taken as increments in the roof space. In addition soil and rock samples were obtained from areas in the region considered uncontaminated to be used for background determinations. All dust samples were sieved to <250mm using nylon screens, because particles below this size fraction are considered hazardous (Duggin and Inskip, 1989). Samples were analysed by ICP-AES for Cd, Cu, Ni, Pb, V and Zn using a total acid digestion procedure with hydrofluoric, nitric and perchloric acids. Separate sub-samples were analysed for As, Cr, Hg, and Se, because of sensitivity using  Neutron Activation Analysis. The major oxides (SiO2, Al2O3, Fe2O3, MnO, MgO, CaO, Na2O, K2O, P2O5 and TiO2 ) were performed on selected samples using X-ray Fluorescence Spectroscopy. For quality control, two certified reference materials and in-house mine site rehabilitation standards and duplicate dust samples were analysed at the same time as the ceiling dust samples. Full details on the analytical procedure will be published elsewhere. 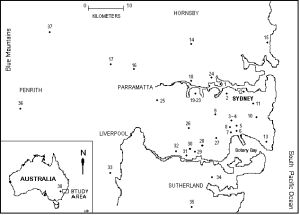 Figure 1.   Map of Urban Sydney showing the location of the 38 sampling sites

In general, ceiling dust is a heterogeneous mixture of particles derived from a variety of anthropogenic and natural sources including: botanical, biological, industrial, smelter and mining, combustion, automotive exhaust, paints, building and construction materials, crustal soil and rock, bushfire debris and ocean spray. Microscopic examination of the dusts has identified some local sources. For example: site 2 is principally composed of combustion material emitted from an adjacent disused coal burner; dust from site 30 contains various lead halides probably derived from automotive exhaust because of its location on a major road; dust from sites 14, 31, 34 and 35 showed elevated levels of pollen, seeds and plant material because they are situated within leafy urban bushland settings. Generally the dusts are comprised of: 40-50% SiO2 (mostly quartz), <20% miscellaneous oxides and up to 8% trace metals, while the remaining 20-30% appear to be mixed carbon based (botanical/combustion) material.

A separate portion of 8 representative samples of the <250mm fraction was subjected to particle size analysis using Malvern laser sizing. Most samples have a bimodal size distribution with the following average volume results: 93% <250mm, 77% <125mm, 50% <63mm, 30% <38mm, 15% <20mm, 7% <10mm, and 1.4% at <2.5mm.  Particles smaller than PM10 but larger than PM2.5 mass equivalent diameters are of the greatest health concern because they are respirable and tend to accumulate within the lungs and nasopharyngeal regions of the body. Between 3 to 7% by volume of ceiling dust particles occur within this range. Particles finer than the PM2.5 ranged between 2.5 to 0.45% by volume.

Table 1 shows the descriptive statistics for As, Cd, Cr, Cu, Hg, Ni, Pb, Se, V, and Zn from the 38 house sites in Sydney. The distributions for As, Cd, Cr, Pb and Zn are skewed, whereas Cu Ni and V show a normal distribution. Metal concentrations are significantly elevated in industrial/commercial and older (>75 years) parts of the city (sites 1-12, Figure 1). Older dwellings tend to have a greater volume of dust. Houses in non-industrial urban areas, aged 25-75 years (sites 13-35), show lower metal values with rural dwellings (sites 36-38) and younger (<25 years) houses containing metal values closer to background levels. These trends were expected given the age of the dwelling, renovations performed, proximity to anthropogenic sources, the type of roof construction, climatic and wind influences and urban infrastructure. The metal concentrations analysed are comparable to other studies of ceiling dusts in Sydney (Fett et al. 1992, Whicker et al. 1997).

The extent of dust exposure and pathways of ceiling dust entry are not fully understood, partly because dust distribution and accumulations within the roof cavity are site specific due to the design and construction of the house. The pathway of ceiling dust is considered separately to house dust, where the dust enters the house through windows, doors and by other avenues (Ferrgussan and Schroeder. 1987, Gulson et al. 1994). Figure 2 illustrates a house cross section showing examples of identified pathways of ceiling dust entering the home and living areas. The major entry point for dust transport is by winds carrying particles through the spaces and gaps in the roof structure. Once air enters the confines of the roof environment a change in velocity is experienced allowing for the dust to settle on the ceiling and roof members in a sheltered environment. At this stage the undisturbed dust does not appear to pose a serious health risk.

Ceiling dust maybe hazardous when volumes of dust are disturbed and distributed to the living areas of the house exposing the occupants, especially children, to high levels of metals and fine particles. Two exposure event types are identified, primary (catastrophic) and secondary (passive) pathways. Primary dust exposure pathways that disturb large volumes of dust particles into the living areas of the house include:

Figure 2 House cross section showing examples of the dust pathways from the roof, through the ceiling to living areas below.